It is very important to properly understand the meaning of karma in Buddhism. According to Buddhism, karma is not the ‘creator of the universe’, but refers to one’s own actions and their results, actions and reactions. In all Buddhist schools and methods, including Mahayana and Vajrayana, ten simple actions are mentioned which have a healing or unhealing effect on every living being, depending on how they are performed.

Khenpo Mriti, born in 1974, received intensive training in Buddhist philosophy and practice and since 2005 has given courses in Buddhist philosophy and history and in Tibetan language to monks and lay people, including at the Karmapa International Buddhist Institute (KIBI). In 2017 Khenpo Mriti took his monastic vows and is currently studying at the University of British Columbia, Vancouver, Canada, for the Master of Art in Asian Studies with a special focus on contemporary Tibetan Buddhism. 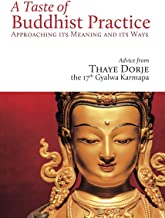