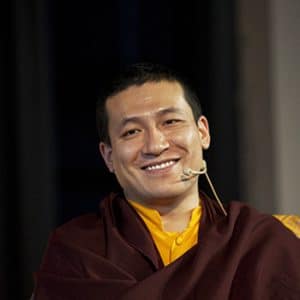 Biography of Thaye Dorje, His Holiness the 17th Gyalwa Karmapa

From childhood in Tibet to travelling the globe as a world Buddhist leader. From traditional texts to social media. The life story of the Thaye Dorje, His Holiness the 17th Gyalwa Karmapa, spans East and West, just as his activity bridges traditional values and contemporary issues. Here is Karmapa’s official short-form biography:

Karmapa was born on 6 May 1983 in central Tibet. His parents were the great Nyingma lama Mipham Rinpoche and Dechen Wangmo. As soon as he could speak, he told them he was the Karmapa. The Karmapas are the leaders of the Karma Kagyu lineage of Tibetan Buddhism.

In March 1994, in accordance with the 900-year-old tradition, Thaye Dorje was enthroned as the 17th Karmapa. His Holiness the 14th Kunzig Shamar Rinpoche, the second most senior Karma Kagyu lama, enthroned him. The 14th Shamarpa, Mipham Chokyi Lodro was himself recognized by the 16th Karmapa and His Holiness the Dalai Lama in 1957 and officially enthroned in 1963. Kunzig Shamar Rinpoche passed from this life on 11 June 2014.

The first Karmapa, Dusum Khyenpa, was born in 1110. The first Dalai Lama, Gendun Drub, was born in 1391. The Karmapa leads the longest unbroken chain of reincarnated leaders among the four schools of Tibetan Buddhism.

Karmapa escaped from Tibet in 1994. In 2003, his formal education was completed when he received the title of Vidyadhara, or Knowledge Holder of the Sutras and Tantras.

Today, Karmapa travels extensively, meeting students, young people, world leaders, and leading lights in the fields of spirituality, peace, conflict resolution, and education. He has the spiritual responsibility for over 900 monasteries and meditation centers around the world.

Karmapa’s activities include: empowering young people; meeting international leaders in the fields of spirituality, peace, conflict resolution, and education; and creating videos and articles to promote peace and prosperity in our world.

More than half of the world’s population is under the age of 30. For Karmapa, young people are therefore essential to engage with for peace in our world. Karmapa says that “It is essential that non-material values are supported, to help us cultivate balanced and beneficial human beings.”