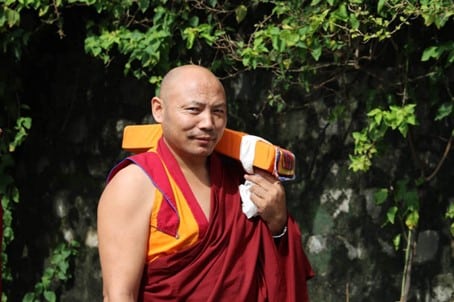 Khenchen Samdrup Rinpoche, a high scholar of the Dzongsar Shedra in India, is coming to Europe and we are excited that he will also come to teach here.

On the last weekend of February, 24-26, this highly accomplished scholar will give a course on the four pillars of vigilance, also called the four foundations of mindfulness. Here the aspects of body, feelings, mind and phenomena will be explored in depth. This practice of mindful examination goes back to the Satipatthana Sutra of the Buddha and leads gradually to the realization of the true nature of phenomena, which are characterized by interdependence and impermanence and are not truly existent.

Khen Rinpoche Samdrup was born in 1975 in the Kham region of eastern Tibet. In 1986 he entered Dhong Tshang Monastery (closely associated with Dongsang Shabdrung Rinpoche). Until 1993 he received his basic education in Tibetan literature and made several retreats. After that he received the complete path and fruit teachings from Luding Khenchen Rinpoche. In 1994, after going into exile, he joined the Dzongsar Shedra, and in 2003 he completed all his studies in philosophy and Vajrayana there. During the winter breaks, he received many important teachings and instructions from both His Holiness Sakya Trizin and Dagchen Rinpoche. He took his higher monastic vows with Luding Khenchen Rinpoche in 2005 and became a fully ordained monk. From 1999 to 2001, he himself served as a teacher of Tibetan literature at the Shedra. He then served as a revision teacher for two years. Since 2004, he has been a full-fledged teacher at the Shedra. He received his Khenpo title from His Holiness Sakya Trizin in 2008, and in 2016 he was appointed head of the Dzongsar Shedra by Kyabje Dzongsar Khyentse Rinpoche.

Fee for the whole course: € 75, reduced € 60. The reduction is valid for supporting members of Bodhi Path Renchen-Ulm, for retired people, students and unemployed people.

Language: Tibetan with German translation only