Information from the Bodhi Path Center

Karmapa News.org 20.-22. July 2012 – HH Gyalwa Karmapa visits Renchen Ulm for the second time His Holiness the 17th Gyalwa Karmapa visited the Bodhi Path Center Renchen Ulm on July 20-22, 2012. It was his second visit here. Only 40km from Strasbourg, in the foothills of the Black Forest in the midst of a lovely landscape that is famous for its fruit and wine growing, Renchen Ulm exudes peace and quiet. His Holiness’ first visit was in 2008 and the number of His followers attending that year’s program has since tripled. It was the biggest event ever organized by the team there and they pulled it off beautifully – everything went like clockwork and seemed effortless. On January 20th and 21st, His Holiness began with a commentary on the famous Bodhicarya-Avatara (Guide to Life as a Bodhisattva), one of the standard works in Mahayana Buddhism, written by the great Indian Buddhist scholar Shantideva.

His Holiness the Gyalwa Karmapa gave the teachings in both Tibetan and English, followed by translation into German and a few other languages. Before beginning the commentary on the root text, he gave a general introduction to this great text: “The text deals with Bodhisattvas – persons who have produced the enlightened mind – and their activities and conduct. He explains what anyone who wants to follow this path can do.” He further explained why the Bodhisattvas are also called the sons of the “victorious ones” (Buddhas). “Buddhaship is a state of mind in which karma, kleshas (affecting emotions) and habitual patterns have all been completely conquered and all things are known as they are. No one can challenge this state of mind, hence it is called “victorious.”

Bodhisattvas arise from the very mind that the Buddhas realized. Therefore, they are known as the “heart-sons of Buddha,” since the heart of Buddha is nothing other than the enlightened mind (bodhicitta).” After that, His Holiness gave a clear and profound commentary on the opening verses of the first chapter. He will continue his commentary on the Bodhicarya Avatar at some of the other centers he visits during his visit to Europe. He also took plenty of time for questions and answers and gave an impromptu blessing to the more than 1,500 devotees present on the second day of the visit. On the final day, July 22, His Holiness gave a transmission on Chenresig, the Buddha aspect who embodies the compassion of all Buddhas. The broadcast began at 10:00 am and His Holiness took plenty of time to explain to those present the importance of this particular aspect. He gave detailed teachings about the ritual, making sure those present knew what to focus on at each stage.

Monday, July 11, 2011 Distinguished visitors at the Schiller-Gymnasium Schoolchildren in the tenth grade experienced a memorable afternoon on December 20, 2010. At the invitation of Dipl.-Theol. Stephan Maier visited Lama Jigme Rinpoche, one of the highest-ranking representatives of Tibetan Mahayana/Vajrayana Buddhism, at the Schiller Gymnasium. As part of the Catholic religious education class, the students learned the basics of Buddhism. After a welcome by the headmaster Manfred Keller, Jigmela Rinpoche gave an insightful overview of the history, teachings and paths of Buddhism, the center of which is meditation. Sabine Teuber, who accompanied the Tibetan Lama, skilfully translated the explanations presented in English. After the lecture, the students, who listened very intently, were given the opportunity to ask questions and thus to set personal accents. Here, too, Ms. Teuber ensured fluent English-language communication with Jigmela Rinpoche. She heads the Buddhist Bodhi Path Center in Renchen-Ulm, which the lama opened in March 2006. After almost two hours, an afternoon came to an end, which both the high school students and the teachers present will have fond memories of. Catherine Nikolitsch Stephan Maier.

Bulletin of the clubs from 08/22/2008 Last weekend there were important visitors in the Bodhi Path center in Ulm. His Holiness the 17th Gyalwa Karmapa, the spiritual head of the Karma Kagyu lineage of Tibetan Buddhism, was a guest – an honor for the Buddhist center, which has existed since the beginning of 2006. Mayor Bernd Siefermann and Erlach Mayor Herbert König welcomed Gyalwa Karmapa on Saturday, August 16th. in the Erlacher Kronenhalle on the occasion of a public lecture and presented a welcome gift from the region. His Holiness spoke about how to create happiness through an attitude of compassion towards others. It was a very moving lecture, which was followed with great interest by the approximately 500 German and international guests. The Bodhi Path Center team was delighted with the success of the event and the positive feedback from guests. 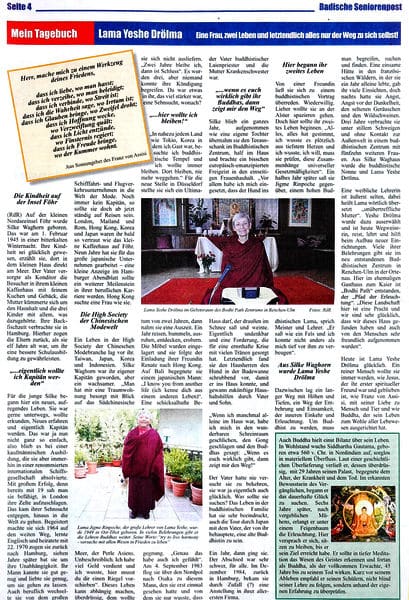 Appeared in the Acher-und-Bühler-Bote on Friday, May 26, 2006
Lama Yeshe Drölma teaches in the Ulm center / women teachers are still unusual Renchen-Ulm (rdr). “Bodhi Path” means “Path of Enlightenment” and is an international organization of Buddhist centers of the Karma Kagyu lineage, founded by Shamar Rinpoche. Rinpoche and other highly qualified teachers teach meditation and philosophy and guide the way to learn and practice the great compassion of Mahayana/Vajrayana Buddhism. And Bodhi Path is the name of a newly established Buddhist center in Renchen-Ulm. It recently opened its door to those who are interested and have questions. Questioning and searching for one’s own truth is also what Buddhism teaches. It’s not about simple acceptance and glorified “letting go” into a new kind of zeitgeist or traditional wisdom. Everyone is sent on a quest to get their answer.

“A likeable way of finding your way. As friendly as the hosts who look after the house in the former Kaier restaurant,” said visitors at this open day. Karin and Hans Berner, Nina and Sabine Teuber have shared the tasks among themselves and live together on the basis of their Buddhist faith. From the friendly designed sun terrace, the view lingers on the forest and fauna of the small village of Ulm. The silence is broken only by the children playing and the chirping of birds. “This landscape is magnificent – we are very happy that we have found this house here and that the people have given us a warm welcome”. Words from Lama Yeshe Drölma, a female teacher of Buddhist wisdom and practice. It is unusual that women are now also allowed to teach, although Lama means translated: unsurpassable mother.

Lama Yeshe Drölma was selected as capable by her teachers. Before that lay a long period of learning. From a well-travelled fashion specialist who felt at home between continents to a Buddhist teacher, there were years of solitude in a house in a small forest in France, where the wild boars scared her badly. Years in a closed retreat center, exactly three years, three months and three days with 15 other women without contact to the outside world, years of meditation and inner contemplation. “It was a lecture I attended in Hamburg in 1985 that changed my life,” she says. “I knew in my heart that what I was hearing was correct, but I had to check it first.” Buddha, too, once took stock of his life. Siddhartha Gautama, born around 560 BC, grew prosperous. in northern India, carefree in material abundance. According to historical tradition, tired of it, he left his palace at the age of 29 and met old age, illness and death.

In the recognized awareness of the ephemeral, he began to seek lasting happiness. Six years later, after vain efforts, he attains enlightenment under a fig tree. Here he promised himself that he would remain seated until he had reached his destination. He should recognize the nature of the spirit in deep meditation and henceforth work as Buddha, as the fully awakened one, for 45 years until his death. Shortly before his death, he advised his students not to follow his teachings blindly, but to check them on the basis of their own experience. The quiet mind as the goal of the path to enlightenment. Learning to understand one’s own nature and attaining the highest level of knowledge. High goals? This is where the meditation comes in. The conscious channeling of the flood of thoughts, the gentle stepping out of the fullness into the emptiness in order to reorganize and recognize. Lama Yeshe Drölma: “As long as we are caught up in the never-ending stream of thoughts and emotions, we lose our strength and calm.

Out of the silence we can awaken and recognize and understand the divine principle, our universal nature. When you know yourself, you also know the other”. The aim of Künzig Shamar Rinpoche’s spiritual leadership was to find a center close to France and the neighboring city of Strasbourg. The highest teacher in the Kagyu lineage and Lama Jigme Rinpoche will soon be visiting the Buddhist center in Renchen-Ulm. From Monday to Thursday, the center is open at 8 p.m. for beginners or those with some experience in meditation.

Press on the death of Shamar Rinpoche

On June 11, 2014, Shamar Rinpoche died suddenly and unexpectedly at the Bodhi Path Center Renchen-Ulm, his European seat. After spending two days in the tukdam, Rinpoche entered parinirvana on June 13, a special Buddhist holiday, accompanied by thousands of people who paid their last respects.