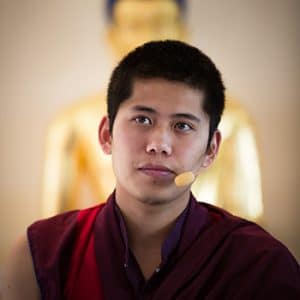 Je Karma Trinleypa is a Tulku of the Karma Kagyu lineage, who are only incarnating every five or six generations. The 1st Je Karma Trinleypa was one of the greatest masters at the end of the 15th / beginning of the 16th century in Tibet. He was a disciple of the 7th Gyalwa Karmapa and a teacher of the 8th Karmapa Mikyö Dorje. Also he was playing an important role in the Sakya tradition and received numerous Sutra- and Tantra-teachings from different transmission lineages inclusive the Shangpa Kagyu and Drukpa Kagyu lineage.

The current 4th Karma Trinleypa was born in Nepal and in the age of four he was recognized by Shamar Rinpoche as the above-mentioned reincarnation. In the meantime, he has completed his studies at the renowned Sakya College in Deradun and teaches in different Buddhist centers.