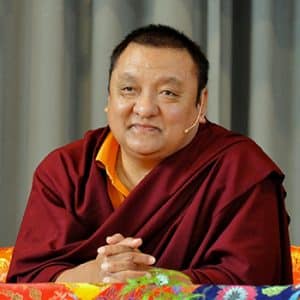 The Karmapa, spiritual head of the Karma Kagyu school of Tibetan Buddhism, and the Shamarpa are considered to be two different manifestations of the one and same awakened being, also referred to in Tibetan as “Karmapa Sha Mar Nag” meaning The Black Hat and Red Hat Karmapas. Hence the responsibility of leading the second oldest school of Tibetan Buddhism rests equally on the Shamarpa. Since the passing away of the 16th Karmapa in 1981, Shamar Rinpoche was the head and principal lineage holder of the Karma Kagyu order of Buddhism.

At the age of 5, Shamar Rinpoche, together with his brother Lama Jigme Rinpoche, were sent by their mother to be with the 16th Karmapa at Tsurphu Monastery, in central Tibet. Rinpoche spent the next 24 years of his life receiving all the transmissions of the Karma Kagyu lineage directly from the 16th Karmapa, thereby maintaining an uninterrupted flow of precious teachings from one lineage holder to another.

Rinpoche went on to give teachings and transmissions at Karma Kagyu centers all over the world. All the while dedicating time and effort toward the development of proper education system for monks in India and Nepal. Rinpoche realized the significance of these institutions for the future of not just Karma Kagyu but Buddhism in general. The following are some of Rinpoche’s key institutions:
The Diwakar Primary School in Takdah, Darjeeling, India
The Buddhist Diwakar Academy in Kalimpong, West-Bengal, India
The Karmapa International Buddhist Institute (KIBI) in New-Delhi, which serves as a University for international students
The Sharminub Institute in Kathmandu, Nepal, which will eventually serve as a University for advanced Buddhist studies
Shamar Rinpoche also established within the Sharminub campus, the Nera Jana Retreat Center for selected advanced monks who focus on the Mahamudra meditation with the 35 Buddhas being the main daily practice.. The Nera Jana monks are extremely important to the purity of Shamar Rinpoche’s vast mandala, as they hold the full 253 Vinaya vows and are dedicated to practicing for the benefit of all sentient beings.

In 1996 Shamar Rinpoche started to organize the Bodhi Path Buddhist Centers, a network of centers based on a non-sectarian approach to Buddhism. The curriculum of Bodhi Path centers is grounded in the teachings of the 11th century Indian Buddhist master Atisha, as they were transmitted by Gampopa. Atisha’s methods are the most effective for taming the mind and deepening wisdom, and in addition can be taught and employed in a secular way.
In January 2009, Shamar Rinpoche founded the Infinite Compassion Foundation (ICF) in Hong Kong to safeguard and promote animal rights. Rinpoche was particularly keen on spreading awareness about the humane treatment of animals that are raised for consumption of their meat and other dairy products. Instead of promoting vegetarianism, Rinpoche advocated a transformation of the meat industry, such that animals would no longer be forced to live and die under brutal conditions.
ICF was also founded in countries such as Germany, Switzerland and the United States among others. In addition to campaigning for the plight of animals, the foundation also helps in supporting the Sharminub Institute and different school projects in the Himalayan region founded by Shamar Rinpoche. The foundation, with the help of the members of the different institutions, played a key role in delivering aid to the victims of the disastrous earthquake that struck Nepal in 2015.

Shamar Rinpoche authored several books. In The Path to Awakening, Rinpoche provides an extensive commentary on Chekawa Yeshe Dorje’s Seven Points of Mind Training. Chekawa’s text was based on the Mind Training (Lojong) teachings brought to Tibet by Atisha in the 11th century, and Shamar Rinpoche’s commentary elucidates the inner meaning of Chekawa’s Seven Points. It is both a guide to living a fulfilling life as a Buddhist and a comprehensive manual of meditation techniques.
In Creating a Transparent Democracy: a New Model, the first book written about democracy by a Tibetan Buddhist teacher, lays out a framework for establishing a genuine democratic system of governance that promotes the welfare and prosperity of a population. This model proposes a system of democracy based on the decentralization of political power, the promotion of political literacy among the population of democratic states, and an end to campaigning. It was Shamar Rinpoche’s wish that this new model of democracy will inspire volunteers to dedicate themselves to improving the lives of their fellow citizens through sincere engagement with the structures of their governments.
More books of Shamar Rinpoche can be found here.
See more information on the Shamarpa lineage.
Shamar Rinpoche’s Official Website: www.shamarpa.org

On June 11, 2014, Shamar Rinpoche suddenly yet most peacefully passed away at the Bodhi Path center in Renchen-Ulm, Germany, his European seat. After having remained in the Tukdam (meditative posture) for two days, Rinpoche entered into Parinirvana on June 13, the anniversary of the historical Buddha’s awakening, accompanied by thousands of people who came to pay their respects.
More information…